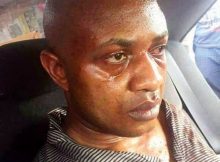 Following reports that Evans father, Mr. Stephen Onwuamadike was living in poverty in thevillage while his Billionaire kidnapper son was living an extravagant lifestyle, Evans has revealed that he took good care of him by buying him two vehicles and also gave him th sum of N3 million, which he said his father used to start fish farming and his pig rearing business
Evan who led police operatives to two houses in Ejigbo and Igando areas of Lagos state where he kept some of his victims for months, made the disclosure during a chat with Vanguard.
READ ALSO :  "I'm now beautiful and expensive, I deal with private jet owners not cars" Bobrisky tells 'broke niggas'

‘My father cannot say that I didn’t take care of him and my other siblings.

I took good care of my father even when he didn’t take care of me. My father lived a very wayward life as a person.
READ ALSO :  ‘Chop Clean Mouth: Prostitute bites customer’s penis for refusing to pay after sex ’He stopped paying my school fees which made drop out of school. He went on to marry a second wife.   As if that wasn’t enough, my father took a third wife and he married her as a 70-year-old man.
READ ALSO :  Man Caught His Neighbour Having Sex WIth His Wife On Their Matrimonial Bed
READ ALSO :  “How We Steal Money From People’s Bank Accounts” – Fraudster
‘’I was not happy with my father, that was why I don’t go close to him but I made sure I provided all his needs. I bought him a car and a bus. They are in our compound and I also gave him N3 million which he used for his pig and fish farming business.
According to him,  he used to help his family members a lot including children of his father’s other wives, stating that his father lived a wayward life that made him divorce his mother.
READ ALSO :  Photos: The Nigerian Community In Asia Need Help In Locating The Family Of A Nigerian Man Named Onyebuchi Who Was Found Dead In His Apartment
He continued‘’I know I have done terrible things but I want to be forgiven.  I also want to advise other criminals to turn a new leaf. The Nigeria Police is not what it used to be. They are far more advanced than they were. If they could arrest me, there is no criminal they can’t arrest, “he stated.
READ ALSO :  How This Nigerian Senior Policewoman Was Caught Having Sex In Her Car, Then Go Home With Demotion
He also revealed that the Igando hideout, located at Green Street, was where he kept five persons including  Chief James Uduji and Francis Umeh at the Igando den. He stated that he vacated the den when people started suspecting his activities in the area.
READ ALSO :  Open Letter to Churchill & Tonto Dikeh by Dominic Barcity
He further disclosed that he rented the apartment in 2014 stating that he kept Francis Umeh for five months in that apartment before he moved to the other house in Ejigbo.
Post Views: 2